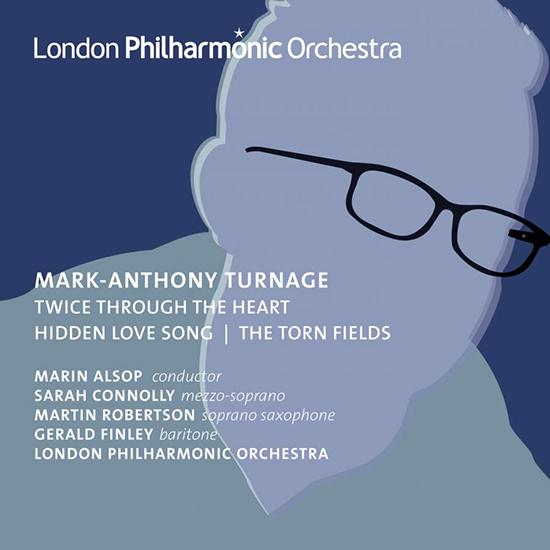 Ten years after its first performance at the Aldeburgh Festival, Marin Alsop conducts a studio performance of Turnage’s remarkable work for mezzo-soprano and chamber ensemble, Twice Through the Heart. The piece is a collaboration with poet Jackie Kay and explores the real-life story of an abused woman imprisoned for the murder of her husband. The music is lyrical but abrupt, painful but often quiet and reflective; one of the composer’s most finely crafted, intensely moving and technically accomplished works. ‘It’s almost made for Sarah’s [Connolly] voice’, says Turnage, ‘she gets very close to the heart of it’.

The Torn Fields was also recorded in the studio, and is sung by baritone Gerald Finley, for whom Turnage wrote the work in 2000-02. This often nightmarish, vivid glimpse of the destruction of war using poetry from 1914-1918 is another example of the composer’s extraordinary ability to create vocal lines that embody their texts. Turnage has himself commented on the huge challenges he experiences when writing vocal music, but concedes that ‘writing for Gerald Finley makes it easier…he is, in my view, one of the greatest baritones around’.

Sandwiched between these works is a recording made live at the world première of Turnage’s Hidden Love Song in January 2006. The soloist, Martin Robertson, is another close friend and regular collaborator with Turnage, and this performance reveals the sensitive, delicate nature of Turnage’s musical gift to his wife Gabriella Swallow.

Turnage: Twice Through the Heart, Dramatic scena for mezzo soprano and 16 players

Turnage: The Torn Fields, for baritone and large ensemble