Elgar: The Crown of India 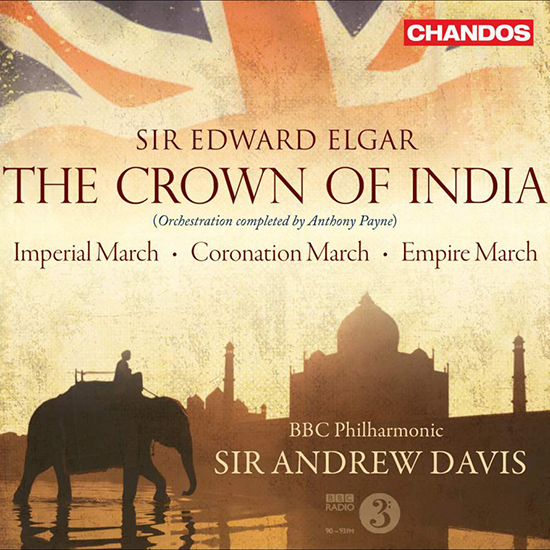 Chandos are delighted to present the first complete recording of the masque The Crown of India, performed here by Clare Shearer and Gerald Finley, with the BBC Philharmonic and Sheffield Philharmonic Chorus, conducted by Sir Andrew Davis. Completed by Anthony Payne in 2008 the work conveys all the pomp and pageantry with which Elgar is associated. The work is presented on 2 CDs. Disc 1 includes the entire masque with narration, whilst Disc 2 contains only the music and Marches. The set is sold at the price of one full price CD.

This recording is also the first with Sir Andrew Davis, now signed exclusively to Chandos. Sir Andrew’s fascination with Elgar goes deep, including taking the symphonies all over the world. He says of The Crown of India, ‘He’s [Payne] done a terrific job. This is from Elgar’s mature period, the time of the Violin Concerto and Sospiri. There’s a ‘March of the Moguls’ which is the only march I know in three time and an exquisite interlude with solo violin.’

The elaborate pageant and theatrical presentation, The Crown of India was first staged in 1912 to celebrate the visit of King George V and Queen Mary to Delhi for their coronation as Emperor and Empress of India. Elgar wrote the music as his Op.66, with a libretto by Henry Hamilton. Sadly the score was only published in a piano-vocal version and the remaining orchestral parts were destroyed in the 1960s. In 2007 the Elgar Society set about a commission for Anthony Payne to complete the orchestration of the music, with the orchestral suite and marches.

Sir Andrew Davis continues to be resident in Chicago, where he has been Music Director and Principal Conductor of the Lyric Opera Chicago since 2000. His association with Chandos will see him conduct the principal BBC orchestras as well as orchestras around the world.

Elgar: The Crown of India, Op. 66 (orchestration completed by A. Payne, version without narration, ed. A. Davis)