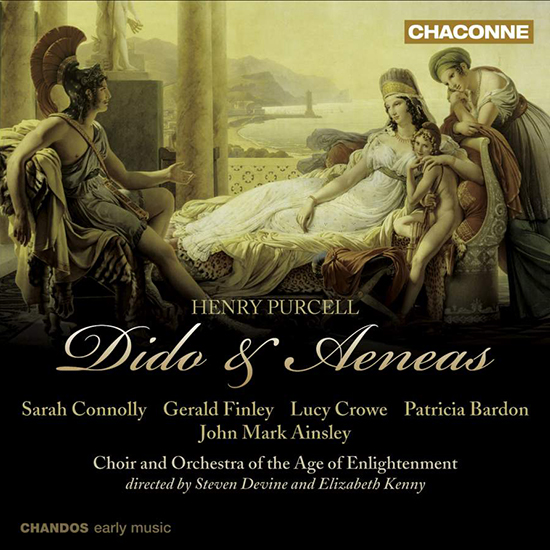 Chandos’ featured release is a new recording of the first English operatic masterpiece, Purcell’s tragedy Dido and Aeneas. Starring Sarah Connolly, Gerald Finley, with the Orchestra and Choir of the Age of Enlightenment, it is released to commemorate the 350th anniversary of Purcell’s birth.

Directed from the keyboard by Steven Devine and Elizabeth Kenny as in recent concert performances, the ensemble presents the opera in a version that incorporates other dance works by Purcell.

There have been two revolutions in scholarly thinking about Dido and Aeneas and both had serious implications for historically inclined performers, and demand a creative response today. The musicological backdrop to this recording results in a performance closer to the court entertainment of Purcell’s day, in which musical dramas evolved from the English theatre tradition.

Act I: Shake the cloud from off your brow (Belinda, Chorus)

Act I: Ah! Belinda, I am press’d with torment (Dido)

Act I: Whence could so much virtue spring? (Dido, Belinda, 2nd Woman, Chorus)

Act I: Cupid only throws the dart (Chorus)

Act I: If not for mine, for Empire’s sake (Aeneas, Belinda)

Act I: To the hills and the vales (Chorus)

Act I: The Triumphing Dance

Act II: The Queen of Carthage, whom we hate (Sorceress, Chorus)

Act II: Thanks to these lonesome vales (Belinda, Chorus)

Act II: Groves’ Dance: Then since our charms have sped (Chorus)

Act III: Our next motion (Sorceress)

Act III: Your counsel all is urg’d in vain (Dido, Belinda, Aeneas)